Hello Dear Readers,
Halloween month is in full swing and so is Bewitching Book Tour’s Halloween Spooktacular! Here’s a look at a compilation of short stories featuring my favorite creature of the night: Vampires! Plus, be sure to check out the flash fiction piece by one of the authors in the compilation, and enter the tour giveaway, too!
Enjoy!
xo, Celia 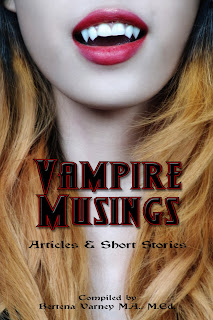 Join 16 vampire fans and writers from around the world for their musings on vampire music, movies, fun facts, and even mesmerizing short stories. This book will make you feel like you are in a room with friends discussing the various vampires that each of you love spanning from aristocratic vampires, to primal monsters, to the Twilight vamps. So, sit down in your comfy chair, turn on the vampire music provided in this book, pick up that Bloody Mary, and escape to a world full of vampires.

There is a recount of the life of Anne Rice, reviews of books, movies, and television shows, a look at vampires as religious figures, romantic stories, and traditional stories of the vampire.

Each of these stories holds intrigue for fans of creatures of the night.

These contributors range from a 12-year-old actress, to college professors, librarians, paranormal romance authors, and even those that live the life of a vampire.

The cover art was created by Stavros while showcasing the model Xamie wearing fangs from Kaos Kustom Fangs, LLC. The model is both alluring but dangerous. She is a great representation of the book and the various stories that are told within.

1909
In late March London, I decided to begin a new life. All of the people who I cared for were gone. Headed off to find something new, I made my way through the busy streets. Beggars lined the route to the Atlantic transport.

Stepping to the ticket window, I asked, “where is the boat headed?”

“One, please!” I said, handing the man my money. He gave me a ticket and asked my name.

“Randis Blackburn.” He wrote my name along with the other ship passengers.

“22.” seems like a good number. After all, my age was unbelievable.

I was waiting for my turn to board the ship. Watching the ship’s two giant smokestacks as they puffed angrily. Parents said goodbye to their children, knowing they might never see them again. A child smiled, waving frantically. I waved back. Her smile was sweet, intentions pure. The feeling of life surged through me. Would I have the strength to leave if I had a child?

“Excuse me,” a quiet voice said, breaking me from my thoughts. I stepped to the side, apologizing for being in her way. “Is that yours?” she asked, looking down at an old worn brown trunk that sat at my feet.

“No,” I answered, gazing into her deep green eyes. I was frozen in place by the depth of her stare. There was something familiar about her; I couldn’t say what. She bent down, picking up the lock in her hand. She turned the key, opening the lock. She let out a sigh of relief as she pulled open the trunk.

The smell of wild roses filled the air around me. She turned and smiled at me quickly before shutting the lid. The scent of roses hit me once again. Locking the trunk and standing to her feet, she held her lacey gloves that she had taken from the chest in her pale hands. With a smile, she said,

“Please, Call me Randis,” I stuttered out.

“You are?” I asked as I took her hand, slowly lifting it to my lips and kissing her warm hand gently. I looked up to see her rosy cheeks. I had made her blush.

“Sarah.” She said in a nervous voice.

“Nice to make your acquaintance, Sarah.” Holding her hand in mine, I said, “Safe journey.”

“Same to you, Randis,” she said, pulling her hand from mine.

As she walked away, I felt that a part of me was now missing. I felt so alone, more alone than I ever had, as she disappeared into the crowd.

Vampire Musings is the 11th vampire book written, compiled, and/or published by Bertena Varney, M.A., M.Ed. This book is an anthology of articles and short stories from academics and fans from around the world. The topics range from Anne Rice’s Life Chronology, vampire detectives, vampire art, vampire films, modern short stories of vampire romance and traditional gothic reads of tortured souls.

Bertena is a former Assistant Professor of Sociology and is still working in higher education.

She has undergraduate and graduate degrees from Morehead State University in sociology, criminology, history, and education. She spent these educational years studying pop culture. 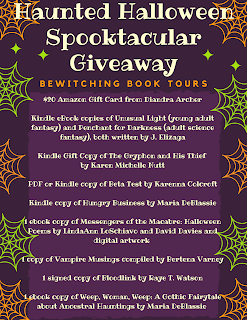