Hello Dear Readers,
We’re four days away from one of my fav months of the year, Halloween month. Yay! In October, you’ll see book spotlights from Bewitching Book Tour’s Yearly Halloween Spooktacular, and more. Today, please enjoy a look at a new release in Urban Fantasy from Author J.D. Brown. Be sure to enter JD’s giveaway, too.
Enjoy!
xo, Celia 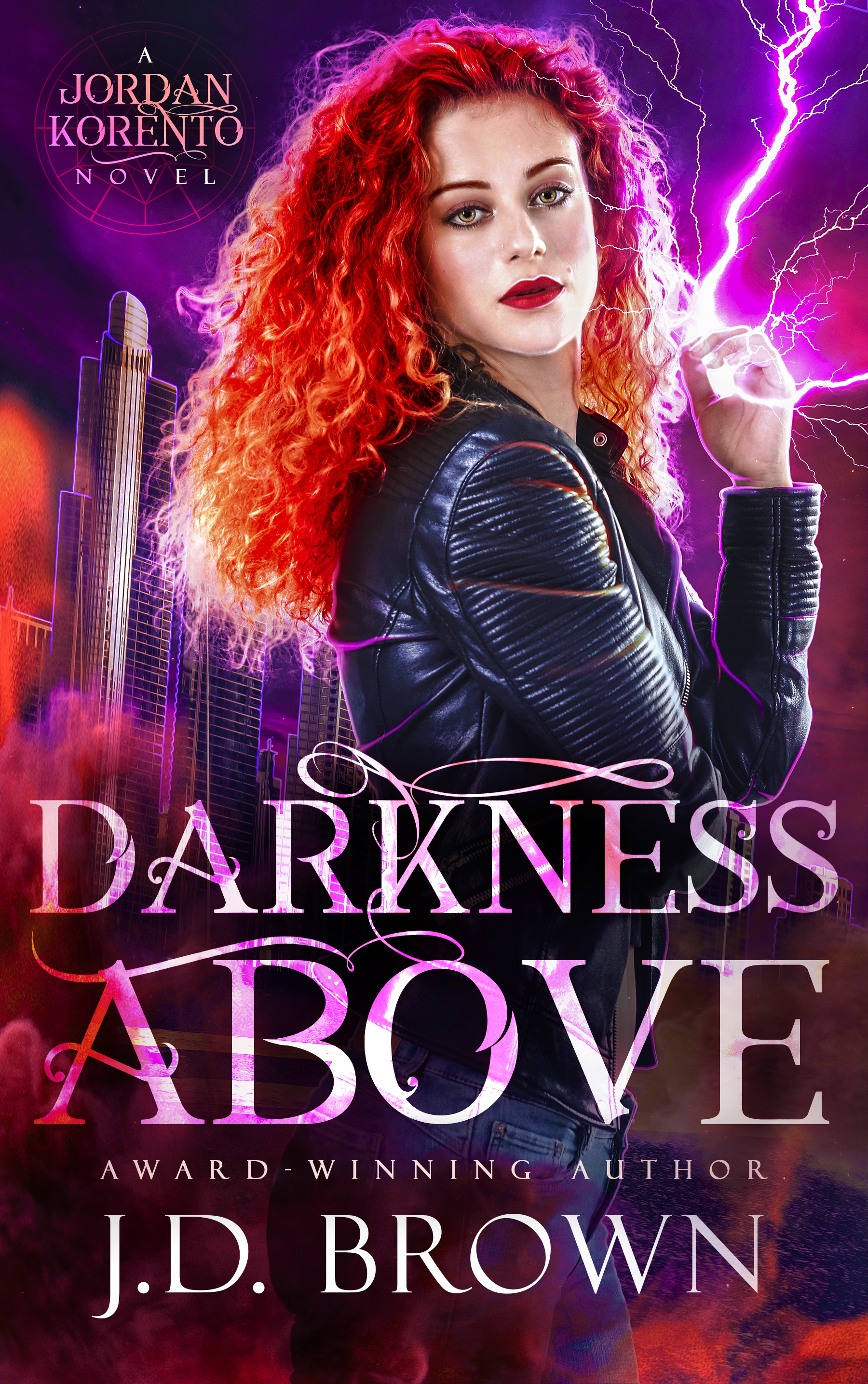 Her parents are legends but they’re losing the war. Now it’s her turn.

Jordan Korento spent her life training for the vampire war, but no one will give her a chance to prove she’s more than just a princess.

When Jordan learns of a twin brother who was sent to live in hostile territory, she takes destiny into her own hands, determined to save the sibling she never met and make her family whole.

Joined by her vampire ex-girlfriend who she still has feelings for—and the mysterious Sergeant who steals her breath with a single glance—Jordan embarks on a rescue mission to Bavaria, where nothing is what it seems. Will she find a kindred spirit in her twin or an enemy lying in wait?

Darkness Above (A Jordan Korento Novel 1) is an adrenaline-fueled urban fantasy full of dark magic and deadly creatures that are as sensual as they are bloodthirsty.

Torrance’s tone—half cheerful, half serious—cut through the bliss of a deep sleep as she shook me awake. “Rise and shine, birthday girl.”

My temples throbbed as I squeezed my eyelids tight and groaned into the pillow. “Ten more minutes.”

“Sorry, no can do.” Torrance yanked the covers away, and I curled into the fetal position against the sudden chill. “I already let you sleep in. Up and at ’em, soldier.”

“Ugh.” My eyelids peeled open, and I blinked to bring the room into focus. The angles confused me for a moment.

“Not my fault you insisted on working. I told you to take the night off.” Torrance offered me a paper cup of water and two generic brand pain reliever tablets. She wore her usual black tank top, cargo pants, and steel toe boots. Her dark shoulder length hair was pulled into a sleek ponytail at the nap of her neck. Torrance was unfairly beautiful with pouty lips, angular cheekbones, and a jawline that gave her features a touch of androgyny.

I sat upright and accepted the pills, swallowing them both in one go before gulping the water. The tip of my tongue ran across my chapped lips as I patted a hand against my auburn curls. My hair was doing that gross thing where half of it stuck flat against my cheek, glued to my drool, while the other half puffed into the air like a poodle’s ass.

“Why am I in your bed?” I asked while handing her the empty cup.

Like all the rooms in the Sword of Somnus Brotherhood dormitories, ours was tiny with two twin-sized beds, two narrow dresser drawers, and a single writing desk between them. I’d fought tooth and nail for this room, though, so I wasn’t about to complain. I just didn’t understand how Torrance’s navy-blue sheets had wound themselves around my legs. My bed stood directly across from hers, with its Buffy the Vampire Slayer comforter neatly tucked into the cheap faux wood frame.

Torrance tossed the paper cup into the wastebasket under the desk and then opened a drawer in my dresser. “You mean you don’t remember climbing in and saying we should be friends with benefits before passing out like a corpse?”

She pulled a pair of clean olive-green cargo pants and a matching t-shirt from the drawer and threw them at me. Since my reflexes were still steeped in alcohol, I didn’t catch the standard issued uniform in time and the clothes hit my face before falling to my lap.

“No you’re not. Now go take a shower, you smell like vomit.”

I touched a hand to my cheek, where my hair was plastered to my face by something that might have been a little too thick to be drool. “I didn’t actually vomit though, did I?”

Torrance crossed her arms and arched her brow. “What do you think I’ve been doing all day? Mopping the floor because it was dusty?”

My gaze went to the mop and bucket in the corner. Neither of us owned cleaning supplies, so she obviously took it from the janitor’s closet at the end of the hall.

Even though vampires didn’t sleep, and Torrance had to occupy herself while I snoozed, she wasn’t my maid. It wasn’t her job to pick up after me. Especially not bodily fluids.

I winced and apologized again. “Sorry.”

Torrance pointed to our shared bathroom. “You can make it up to me by not being late.”

I nodded and then trudged into the facilities where I tiptoed over the cold tile and stepped into the single-person shower stall. I stripped and washed quickly but took a moment to examine the bruises over my ribs and thighs. I doubted Torrance would have let me fall on my ass during last morning’s party, so they must’ve been from training. None of them hurt. Much.

I dried and dressed, adding underwear, socks, and combat boots to the uniform. After applying ample leave-in conditioner, I used my fingers to separate the soft curls and then pulled them back into a ponytail, securing the locks with my favorite rainbow sequin scrunchie.

Torrance knocked on the door. “Done yet?”

“We literally have three minutes to get to the Hall. I mean, I’m fast but ….”
I looked at my reflection in the mirror above the sink and sighed. I hadn’t meant to be hungover tonight. The party was supposed to be a small gathering, but every senior cadet and half the faculty had shown up. These days, people were encouraged to find happiness wherever they could, but that didn’t mean there wouldn’t be consequences. I could only hope that talk of last morning’s festivities didn’t reach Head Huntsman Chayton.

Or worse, my father.

“Jordan Korento, I will leave without you!”

I chuckled at the empty threat. Torrance was my bodyguard. She couldn’t go anywhere without me. But for some reason she always acted as though keeping me punctual was part of her job description.

Looking at my reflection again, I drew a deep breath and released it slowly. To be honest, being late to my shift was the least of my worries.

“This is it,” I murmured to myself. “Tonight, I meet my mother.”

I haven’t seen Mom since I was baby, which meant I had no real memories of her. I should be more excited. Other girls would be. Normal girls. But my family wasn’t normal. My father was a vampire king. My mother was a legend; a vampyre queen who’d done some badass shit in her lifetime. And now she was an elite assassin on her way home after twenty years of training. 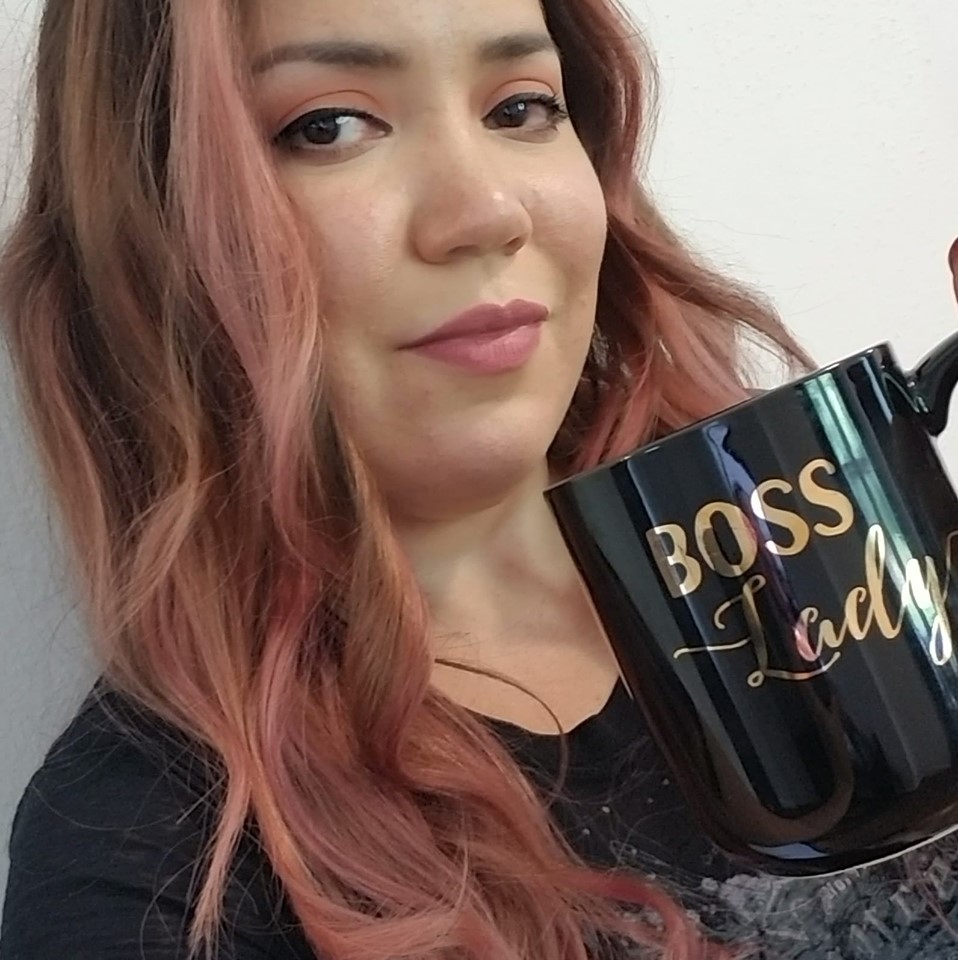 J.D. Brown knows that vampires exist because she dated one, and no he didn’t sparkle. A magnet for subcultures and weirdness, J.D. was that socially awkward girl with more fictional friends than real ones. As a child battling a hearing loss and a medical condition called Muckle-Wells Syndrome, J.D. found comfort in books where strong women always saved the day and got the guy. An obsession with Charmed, Sabrina the Teenage Witch, and Buffy the Vampire Slayer lead J.D. to believe that her mutated genes made her something more, not something less. Thus her stubborn flare to persevere was born.

A lover of fine cuisine, coffee, and shoes, J.D. never understood why shoe stores don’t serve Starbucks and soufflé. She resides in Illinois where she writes urban fantasy – aka vampires for adults – and has political debates with her dogs. She loves to hear from fans and is active on Facebook.com/AuthorJDBrown.

1 2nd place winner will get a free ebook copy of Darkness Above.