Spotlight on #Fantasy: Below Dark Waters by Katie Zaber

Hi Everyone! The smoky San Francisco skies have cleared this week and my windows are wide open as I breathe some sorely missed fresh air and prep this blog post. I have a fantasy read for you today from author Katie Zaber. Be sure to enter her tour giveaway, too. Details below. Enjoy!
xo, Celia 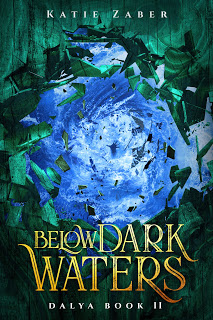 A wayward princess, a lethal woman, and a madam trained in espionage—all strangers to each other, but their fates are entwined. Each choice they make will impact the world of Dalya greater than any man’s decision.

Princess Megan, who never had a reason to assume she was anything but human, has been on the run, protected by her friends. With each step toward the city of Delmont, she hopes they will have time to regroup before setting sail to the Ka’Pamau Islands, their final destination. Instead, her bad luck shadows her and chaos continues to ensue everywhere she goes—including a new part of the world that most air breathers have yet to explore. Confronted with another royal family and a smitten prince whose advances turn cold, she faces another life-altering decision with ramifications she can’t possibly begin to guess at.

Back on land, Lilly reveals more of her secrets, her story, and her goals. Monumental changes and challenges are headed her way as she embraces her new role in life.

On the sea, Aunt Carmia is stirring up trouble while continuing her hunt for the treasure she most desires. She experiences upheavals, but she is always prepared for the unknown.

As their stories unfold, they remain unaware how fate connects them in the world of Dalya.

There’s no point in me lying in bed all night. It’s not like I’m trapped in a Dalya dome. At least there’s a bar for me to sit at while I can’t sleep. Moving as quietly as possible, I change and sneak out of the room. Kilyn is fast asleep and Mana is either asleep or is pretending to be. The hallway is still. There are no voices coming from the other rooms, so I’m going to assume everyone else is asleep.
Downstairs, Meeka sits at a table, chatting with another white-haired man. Two other tables are occupied, but there are at least ten empty tables to choose from. By the fireplace, a low fire crackles and I decide that a seat by the fire is not what I want. It looks inviting but reminds me of too many dark things. I shudder and take a seat on a stool at the driftwood bar. There’s one other man at the far end of the bar, cloaked in shadow, not bothering to look up from his drink as I sit down.
Heda comes from the back of the kitchen with a mug in her hands. She takes a sip before setting it down on the counter. “Can’t sleep, dear?”
“No. Can’t remember when I did,” I say. “Got anything to help with that?”
She gives me a sly smile. “I think I can help.”
Heda slides bottles out from under the counter and starts pouring them into a glass. Most of them are clear, except two. She adds a drop of amber and green liquid. I can’t say if it’s alcohol or not. Last, she takes out a glass jar and takes out a pinch of ground orange powder.
I’m not sure if I should drink this otherworldly concoction.
“Here you go. You’ll sleep till sunrise and feel refreshed, guaranteed.”
I stare down at the eight-ounce glass of mystery. “What’s in it?”
“A bit of everything, plus a little something extra. I make it for Meeka when he can’t sleep.”
“Are you normally this busy at night?” I ask.
“Sometimes. Sometimes busier. The regulars are here, plus an unfamiliar face or two.” She scans the room, glancing over at the two I suspect are new.
The one man her eyes stop on has long, scraggly black hair past his chin and an unkempt beard. He is wearing a hat that reminds me of a witch; it even has a pointy top and wide brim. With his back to us, he faces the fireplace with his shoulders hunched. The other man is the one at the other end of the bar. Neither looks talkative. Good. I’m not in the mood for a conversation either.
The door swings open. A scowling human woman stands in the threshold wearing a brown buttoned-down blouse and pants tucked into calf-high boots. At her hip is a dagger, on her back is a quiver secured tightly to a harness, in her hand an unstrung shortbow. Strands of messy brown hair unravel from a semicontained braid that I’d guess hasn’t been paid attention to in at least a week. Her clothes also reveal that she hasn’t changed them, and the smell confirms she hasn’t bathed. She searches the bar and lands on me.
She dashes across the tavern and my heart pounds. This is it. My father sent her to kill me. I made it easier for her by coming down here all by myself. I have no clue if Mana can sense what’s happening or if I’m too far away from him. I’m not sure if he cares right now.
However, she steps past me and gawks at Heda, who is already mixing another drink. In the few seconds that passed, I didn’t realize that I had held my breath. I let out a lengthy sigh of relief and inhale fresh air that tastes slightly sweeter than before. Relief will do that, especially when moments ago, death seemed so imminent. To help calm myself, I decide to take a sip of the strange drink Heda made me. Surprisingly, it has a peach sangria flavor, like a fruity, potent wine, with maybe a shot or two of something stronger. I could get used to having a drink of this at night, if it helps me get some sleep.
Heda leans across the bar, passing the traveler a drink. “Rough journey?” she asks. “Where are you going?”
“Nowhere fast,” the woman replies. Her scowl melts away as she cracks open a smile and laughs full-heartedly, throwing her head back.

I watch groups of gulls fly back out to sea among the masts, warbling above the crew. They float adrift on the breeze. Their wings don’t pound against the unforeseen air but glide on invisible currents, as my ship does on the waves. Smart birds know when to flap, when to spend their resources, and how to manipulate the world to make their journey easier. They can glide for hours without movement. I crave their knowledge.
To know when to use my strength and when to be weak. When to be bold or meek. When to strike or anticipate.
The birds know. We are so stupid. Driven by destructive emotional impulses and not natural instinct. Once you calm the voices, quiet the bitter arguments feuding from within, becoming deaf to all the voices internal and external, all that’s left is a sensation. A feeling. A truth buried deep inside. A spoken language no one can utter aloud. A forgotten language. One so primal, it is impossible to speak or interpret in any other capacity besides a sense. Born with us, but slowly forgotten when we learn to utter our first words. Almost as if when we learn the spoken tongue, we forfeit our instinctual one.
What makes us so different from the birds? How did our minds become cluttered with pointless information that nags us to change our minds or relinquish a thought?
Gods, I want to be a bird. Free my mind and body of stupidity. Let me base my life on instinct, not sentiment.

I walk these city tunnels every day. It keeps me sane, besides healthy. Sometimes, I even run. I haven’t left Uamh, or Capo’s Secret, in decades. The last time I was above ground, not including my job, was well over thirty years ago. I long for the opportunity to run through the fields of flowers that flourish outside the town’s walls. But the woman who I portray to the citizens of Capo doesn’t do such things. Lilly would never frolic through the meadow and pick wildflowers to weave into her hair. She wouldn’t dance in the river, splashing the cool water over her naked body, and then let the sun’s heat dry the water off her skin. No, she wouldn’t behave in such childish ways.
Nirva would. She would run free in the woods barefoot. Feel Dalya breathe life back into her soul. Nirva would climb the tallest tree and gaze upon the town below, pretending she was a bird, soaring high above the forest. She’d hunt alongside the nunda and sleep in their den, her body and soul free to swim with the fish and river bears in the morning, and flutter on the breeze with the glow bugs at night.
Not now. No, she is locked up for safekeeping. There will be a time and place to bring Nirva back to the light of day. Until then, she must continue to be patient. Our job isn’t done. It’s only begun.

Katie Zaber knows the best way to decide who is cooking dinner is with a Nerf gun fight in the living room. Her boyfriend is an exceptional cook. When she isn’t baking, going to wine tastings, or reading, she’s busy planning her next trip to Six Flags Great Adventure or Long Beach Island, New Jersey. As a child, her mother would read stories about Atlantis and other fictional places that she dreamed of exploring, fueling her love of history, adventure, and fantasy. After spending her days working in a coffee shop, she moved up the ladder getting an office job where she unfortunately was involved in a filing accident. Unable to move, bored out of her mind, and desperate for entertainment, she turned to her imagination and began writing. These days, she finds herself captivated by her many projects and enjoys quiet nights at home.