Hi Everyone! Another author participing in the Bewitching Halloween Spooktacular event, G. S. Denning, is here today with his fun series and, of course, the event’s fab giveaway. Enjoy! xo, Celia 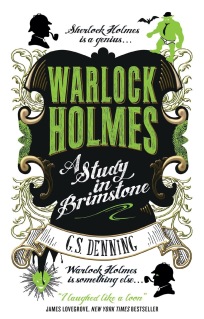 Frankly, he couldn’t deduce his way out of a paper bag. The only thing he has really got going for him are the might of a thousand demons and his stalwart companion.

Thankfully, Dr. Watson is always there to aid him through the treacherous shoals of Victorian propriety… and save him from a gruesome death every now and again. 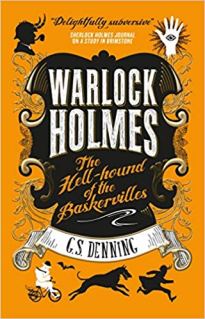 The game’s afoot once more as Holmes and Watson face off against Moriarty’s gang, the Pinkertons, flesh-eating horses, a parliament of imps, boredom, Surrey, a disappointing butler demon, a succubus, a wicked lord, an overly-Canadian lord, a tricycle-fight to the death and the dreaded Pumpcrow. Oh, and a hell hound, one assumes.

As they blunder towards doom, Warlock Holmes and Dr. John Watson find themselves inconvenienced by a variety of eldritch beings. Christmas brings a goose that doesn’t let being cooked slow it down; they meet an electricity demon, discover why being a redhead is even tricker than one might imagine, and Holmes attempts an Irish accent. And, naturally, Moriarty is hanging around… in some form or other.

G.S. Denning furiously studied reading and math until he could play Dungeons and Dragons. His love of DandD expanded to a passion for all things in the sci-fi and fantasy realm, particularly when spliced with comedy – Douglas Adams, Terry Pratchett, Monty Python, Red Dwarf, Black Adder, Whose Line is it Anyway, Dr. Who, and the holiest of holies: The Princess Bride.

He learned his story-telling skills on the improv stage as a member of Orlando Theatersports, Seattle Theatersports, Jet City Improv, and as a Disney Performer at Epcot. G.S. also worked for Nintendo and Wizards of the Coast.

Finally, after realizing that humanity had not used the pun Warlock Holmes yet, he sat down to begin his first novel series: a dark-comic retelling of Arthur Conan Doyle’s classic Sherlock Holmes stories. G.S. Lives in Las Vegas with The Best Wife and The Best Children.