Hello Dear Readers! Laura Bickle is here today with some fun, DIY Halloween Luminaries plus a look at her YA Fantasy/Horror story, Flesh. Be sure to enter the Bewitching Spooktacular giveaway, too! xo, Celia

The dead are easy to talk to. Live people, not so much.

Charlie Sulliven thinks she knows all the secrets of the dead. Raised in a funeral home, she’s the reluctant “Ghoul Girl,” her reputation tied to a disastrous Halloween party. But navigating her life as a high school sophomore is an anxiety-inducing puzzle to her. She haunts the funeral home with her parents, emo older brother, Garth, their pistol-packing Gramma, and the glass-eyeball-devouring dachshund, Lothar.

Chewed human bodies are appearing in her parents’ morgue…and disappearing in the middle of the night. The bodies seem tied to a local legend, Catfish Bob, who has resurfaced in the muddy Milburn river near Charlie’s small town. When one of Charlie’s classmates, Amanda, awakens in the cooler as a flesh-eating ghoul, Charlie must protect her newfound friend and step up to unravel the mystery…and try to avoid becoming lunch meat for the dead.

“Amanda, I…Oh.”
I don’t know what else to say. My brain just shuts down.
She is wearing the sheet, wound around her like a toga. It trails behind her bare feet, sort of like a painting about Greek goddesses I’ve seen in art books. She’s leaning over another body stored in the cooler unit on a cart. Her back is to me, and I can only see her pale skin and her burgundy-black hair shuddering.
“Amanda.”
She turns at the sound of my voice, seeming only to hear me for the first time. Her face is covered in dark blood. In her hand, she’s holding a big chunk of purple flesh. Her eyes are half-closed. The autopsy incision on the elderly body below her has been ripped open, and I’m pretty sure that what she’s holding is a lung.
“So hungry…” she murmurs.
I retreat until my back presses against the cold door. A whimper escapes my lips, and I drop the laundry basket with a sharp crack of plastic on the tile floor. This has to be a dream. A screwed-up anxiety dream that I’ll wake up from any moment now…
Amanda’s black eyes snap open. She stares at the chunk of flesh in her hand. “I…Agh…What’s going on?”
Lothar waddles over to her and begins to beg. Bile rises in my throat. “That’s Mrs. Canner,” I manage to answer. “She’s seventy-two and died of surgery complications for varicose veins. Deep vein thrombosis, I think. I don’t remember.” I’m babbling, trying to keep the bile down.
Amanda drops the lung with a wet splat. Lothar scrambles to it and begins scarfing it down. Her hands are trembling. She presses them to her temples. “I don’t understand. I don’t understand.”
I nudge the laundry basket closer to her with my foot. “I brought you some clothes. And, um. Food. You should get dressed.”
I think I should be afraid. I think I really ought to be. But Amanda seems genuinely confused. She reaches for the clothes I’ve brought her. To be polite, I know that I should really look away. But I can’t move. I am not turning my back on her. My heart pounds, and I struggle to take deep, uneven breaths.
Amanda unwinds the sheet and slips into my clothes. Though I avert my eyes, I see that her shoulder and side are still torn open. But my mother hasn’t begun the autopsy yet, so there is no Y-incision across her chest and abdomen.
“Do you remember what happened to you?” I manage to ask. I congratulate myself for having a rational thought. Woot.
Her voice is halting, and her brow wrinkles as she struggles to button my jeans. “I remember…something was chasing me. Jesus, it hurt…” Her hand comes up to her neck, and she seems to remember, fingering the edges of the wound. “Am I in a hospital?” she asks again.
I suck in a breath. “No. You’re at my house.” It’s not a lie. Not really.
She scans the room, as if registering the sight of the cadavers. “You’re the girl whose parents run the funeral home. The Ghoul Girl.”
“It’s gonna be okay,” I tell her.
“Why am I here?” Her breath makes ghosts in the cold air.
“The Sheriff found you, alongside the road.” That’s true also, even if not the whole truth. “I think we should get you upstairs, so you can talk to my parents…”
She shakes her head, and her dark hair slaps across her face. “No. I…Oh my god. I’m here because…somebody thought I was dead?”
I swallow hard. “Yeah.”
Her hands press to the wound on her side. “But I’m not dead!”
“I…uh…I think we need to get you to the hospital.” I tentatively reach toward her, to grasp her arm and guide her upstairs, toward the light of the much more civilized parlor and rational discussion. This is so far over my head, and I need my parents to handle it.
She shakes her head. “No. No. No.”
I hold her elbow gently, trying to keep her calm until I can get her upstairs to my parents. Her skin radiates cold through the sweatshirt, and I can see that the edges of her neck wound are dry, not seeping so much as a hint of blood. “Come with me.” I open the door and gently lead her into the lab, as if I’m herding a frightened cat. She gazes at the stainless-steel equipment. “I was here. I remember being here.”
“Come upstairs,” I urge, struggling to keep my composure. I use all the empathy that I’ve learned, dealing with grieving family members, trying to understand the shock and lead her away from the Body Shop.
She squints up at the buzzing light. “You were here, weren’t you? You and that woman. Looking at me.”
“My mother,” I say. I’m thinking crap crap crap. I’ve heard of cases of people whose vitals have dropped far beyond detection, who have awoken in hospital morgues. This has never happened to us. Not ever. Oh shit. The other body. Maybe it the same thing…
“The woman with that knife…” Her fingers go to her sternum, where my mother’s scalpel had rested. All of a sudden, Amanda becomes rooted in place, as immovable as a mountain.
“No one’s going to hurt you,” I promise. “Let me make you some coffee.”
She shakes her head, and I feel her trembling. Her eyes slide to the back door.
She slips from my grip. Before I can stop her, she rushes to the back door. She slams it open with a sound like a gunshot and plunges into the darkness.

Laura Bickle grew up in rural Ohio, reading entirely too many comic books out loud to her favorite Wonder Woman doll. After graduating with an MA in Sociology-Criminology from Ohio State University and an MLIS in Library Science from the University of Wisconsin-Milwaukee, she patrolled the stacks at the public library and worked with data systems in criminal justice. She now dreams up stories about the monsters under the stairs. Her work has been included in the ALA’s Amelia Bloomer Project 2013 reading list and the State Library of Ohio’s Choose to Read Ohio reading list for 2015-2016. 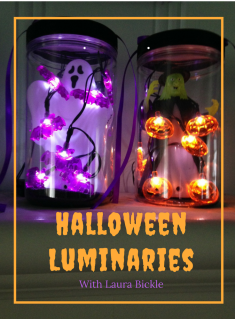 Halloween is one of my favorite holidays, and I love making decorations for this time of year. I looked around at the materials I had rolling around my craft room and raided the displays at the dollar store to come up with some Halloween luminaries to perch in my windows. 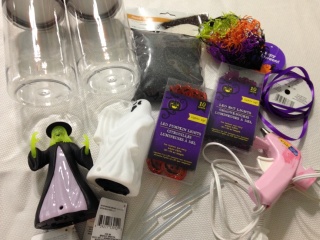 I already had the jars, glue, spiders, and ribbon, but found the LED lights, sand, witch, and ghost at my local dollar store. So I’ve invested about five bucks in this project. I won’t too feel bad if it doesn’t turn out! 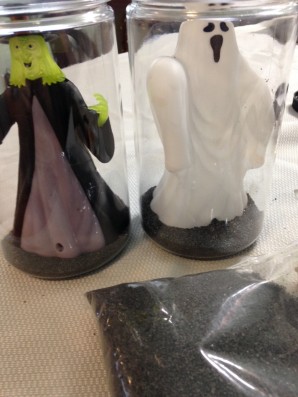 First thing I did was stuff the witch in a jar and the ghost in jars. I had originally intended to use mason jars, but I didn’t have any with mouths wide enough to squeeze the plastic sculptures through. So I used some plastic jars I had handy. I settled the witch and ghost in their new homes, then poured some black sand around their feet to simulate ground. You could also use glitter or black salt or fine pebbles.

Then I put some batteries in my lights and tested them out. I think that I could use fairy lights for this step, too, but I liked the bats and pumpkins. 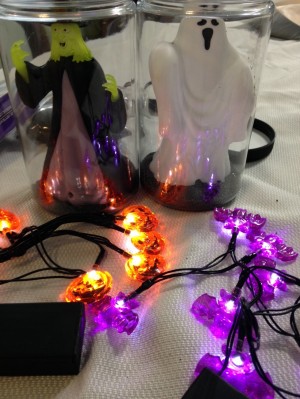 I arranged the light strings in the jars. I used a pencil to push them around so that they showed most clearly from the front. I made sure that the tail of the light string, with the battery pack, extended outside of the jars. I wanted to be able to turn my luminaries on and off and change batteries without digging the whole string out of the jar, though you could leave it in the jar, too. 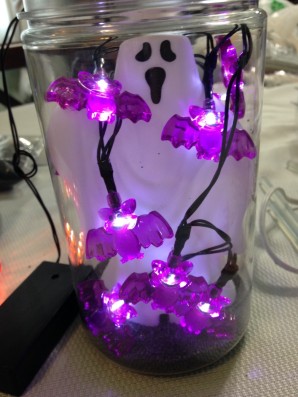 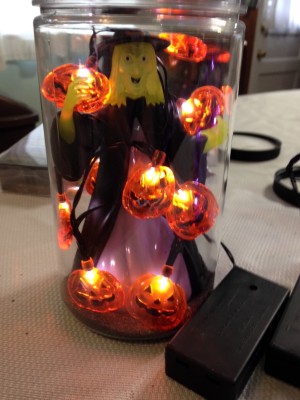 Then, I screwed on the lids. Since my lids were plastic, they didn’t damage the thin wire. I made sure that the wire fed out the back side of the jar. If I needed more room, I would have cut out part of the lid or put the pack behind the figure inside the jar, but this seemed to work fine with these materials.

I cut two lengths of ribbon and fished out a couple of spider rings from the bag of spiders. I cut the ring part off the spiders so that they would lie flat. 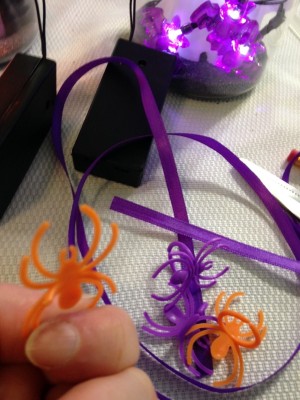 I made a bow with each ribbon and glued one to the top of each jar. In the center of the bow, I glued a spider. 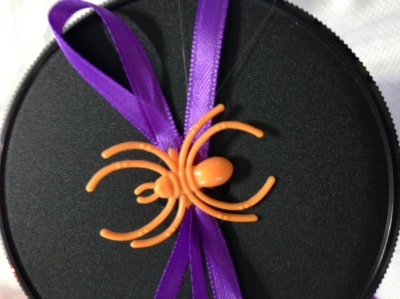 And I was done! Here’s what my finished luminaries look like. 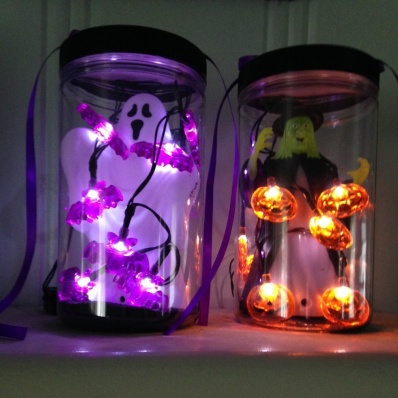 I can’t wait to put these in my window on Halloween!