She joins us today to share her latest release Three Wishes and some fun facts about herself. Take it away, Paula!

What’s on your bookshelf and/or in your To Be Read pile?
I’m reading The Genie Ignites, by Kellyann Zuzulo, and really getting into the mystery/fantasy of her exotic desert story. My bookshelf holds Harlan Coban and James Patterson thrillers, right beside Deborah Harkness’ Discovery of Witches and Diana Gabalon’s Outlander. Your new release, Haven, is at the top of my list when it comes out in June.

Do you have a favorite author?
I find there are too many excellent authors out there to simply choose one. Now that I know what goes into writing quality fiction, I’m in awe of so many storytellers.

If the Earth was about to be destroyed to make way for a Hyperspace Bypass (Hello, Hitchhiker’s Guide to the Galaxy) and you have mere minutes to vacate, what book would you grab to take with you? In addition to your towel, of course. ?
My blank journal. I’d use it to document all the cool stuff happening, and how it makes me feel.

Favorite food:
Fresh micro-greens from my kitchen garden (which I harvested this morning), served with garlic sautéed shrimp. Oh, and a glass of wine, of course.

Favorite TV show? I like to DVR cooking shows.

Vampires or werewolves?
Seriously torn here on this one, Celia. A vampire like Andre Maras in Amber Belldene’s Blood Vine wins a definite yes. Heroes are required to display valiance to catch my eye, regardless of their form. I can think of a couple of Wolf-shifters who fit my description of a hero.

Tell us about your new release, Paula.
Oh, thank you for asking, Celia. 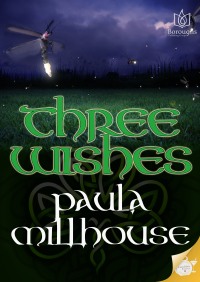 Three Wishes, my new Lunchbox Romance release from Boroughs Publishing Group, tells a magical fairy tale of love lost, and found again. Set in Savannah, Georgia, Abby O’Malley finds herself down on her luck, and lonely. She gets a chance to ask the Universe for a mighty favor – and boy does she get a surprise in return.

Michael McKnight responds the second Abby asks for help. Cursed by the fairy court to wear the insidious disguise of a tiny leprechaun for hoarding gold and misappropriating magic, he’s loved Abby since they were children. He means to see her wishes granted. Together they do battle with an evil banker bent on stealing Abby’s bar, a Savannah historic landmark. Even though Abby doesn’t recognize Michael in his current form, her soul somehow falls for his all over again.

That sets off some pretty spectacular fireworks, and magical transformations.

I’ll avoid any more spoilers and let your readers discover the rest of the story.

I enjoyed writing Three Wishes. Watching these characters come alive and assume their true nature amazed me. I set Three Wishes in Savannah, my hometown – and because we southerners think of St. Patrick’s Day as a national holiday, the setting morphed into a character, too.

Oh, and did I mention all the fairies? Did you know in Irish folklore that leprechauns, a type of fairy, were once enormous, formidable protectors? When organized religion moved in they changed the old stories and reduced the leprechauns to their current size and reputation. Who knew?

Urban legend, or truth? You decide. All I know is tales like this fire up my writer’s imagination.

A special thanks to for giving my short story fairy wings to fly on, and to Celia Breslin for hosting me today.

“For the love of God, you’re a leprechaun!”
Folklore about these little men swam in Abby’s clouded head as she reared up, the creature’s lapels in her grasp. Leprechauns were a sort of fairy without wings. But also… “Gold! Good God! Leprechauns are magic fairies who own gold!”
He narrowed his eyes. “That’s the best you can do?”
“What?” She couldn’t believe she’d caught him.
“Gold. That’s all you got? Is that the only thing you know about us?”
Abby cocked her head but didn’t take her eyes or hands off the creature. Weren’t they supposed to be ugly little old men with canes and a penchant for evil? She moved in closer and inspected him. Definitely not ugly. Handsome, in a way, if a good deal smaller than herself. He looked about four feet tall. More like a dwarf.
A smile lit her eyes. “You’re tall for a leprechaun.”
He leered at her. “Let me introduce myself. My name is Michael McKnight…the Tall.” He winked.
The bitterness in his comment surprised her. Leprechauns were apparently sensitive about their size. Who knew?
She opened her mouth to speak but found herself mute. Michael McKnight didn’t look old, maybe in his late twenties. He had green eyes that sparkled with a color she’d seen somewhere before—maybe in the depths of the ocean? Almost turquoise, with flecks of gold, they drew her in. His hair hung long, a shock of red-blonde locks like hers. Coarse, untamable and thick… She reached out and touched it, curious about the texture. He tried to pull away, his eyes wide, and under her hands firm muscles rippled. She blinked her eyes to clear them while her tummy responded with a strange flutter. Was that attraction? Her leprechaun was buff. Weird.
She shook her head to clear her thoughts and stared into the ocean of Michael’s eyes for a second too long. His expression softened and he drew in a breath, flaring his nostrils. Then he put his hand on her arm and tried to wiggle free. “Not so tight.”
Her heart pounded in her chest. “You owe me three wishes.”
His mouth fell open, and an expression of annoyance clouded his face. “Let me guess. You want my pot of gold.”
A smile pulled at the edges of her lips. Was that what everyone who caught a leprechaun wished for? It would certainly solve a lot of her problems.
He drew in another sigh and searched the far-off woods with his eyes. “Go ahead. Ask away.”    The resignation in his voice only spiked her curiosity.
“It’s true, I need money. I…I…”
He leaned closer and peered into her eyes. “Go on, Abby.”
She knitted her brows and chewed on her bottom lip. “How do you know my name?”
His expression brightened considerably. “Is that one of your wishes? To know how I know your name?”
Curiosity flared, but she held her tongue. He seemed to want to tell her, but panic raced through Abby’s mind and she shook her head. Just state your three wishes. They’re known for their trickery. She refused to let him cheat her out of what she really needed.
“State them.”
“Huh?”
He averted his eyes. “Your wishes. Let’s get this over with, shall we?” Disappointment resonated in his voice. 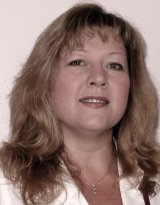 Paula Millhouse grew up in Savannah, Georgia where Spanish moss whispers tales in breezes from the Atlantic Ocean, and the Intracoastal Waterway. As a child Paula soaked in the sunshine and heritage of cobblestones, pirate lore, and stories steeped in savory mysteries of the south. She’s a member of Romance Writers of America, the Fantasy, Futuristic, & Paranormal chapter, the Mystery/Suspense chapter (Kiss of Death), and a member of Savvy Authors.

In the southern tradition of storytellers, she loves sharing the lives of her characters with readers, and following her muse on the quest for happily-ever-afters in thrilling romantic fiction.

She lives with her husband at the base of the Blue Ridge Mountains with their pack and pride of furry babies.