Spotlight on #MagicalRealism: Joe Stillman’s The Man Who Came and Went

Hi Everyone!
It’s the second week of November already, can you believe it? Let’s start it off with a look at “The Man Who Came and Went,” a story by Emmy and Academy Award nominee and writer of “Shrek,” Joe Stillman. Read an excerpt and be sure to enter his tour giveaway for a signed copy, too!
xo, Celia 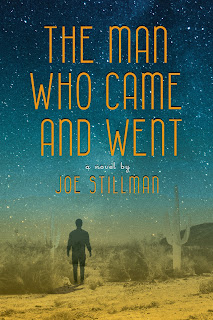 A grill cook who mind-reads orders.
A diner that changes lives.
Tips appreciated.

Fifteen-year-old Belutha Mariah, our storyteller, is the oldest of three kids from three different fathers. Her life’s goal is to keep her dysfunctional mom, Maybell, from procreating yet again and then to leave the coffin-sized town of Hadley, Arizona the second she graduates high school.

Along comes the new grill cook at Maybell’s Diner, Bill Bill, a mysterious drifter with the ability to mind-read orders. As word spreads, the curious and desperate pour into this small desert town to eat at Maybell’s. Some believe Bill knows the secrets of the universe. Belutha figures he’s probably nuts.

But his cooking starts to transform the lives of locals and visitors, and Belutha finds her angry heart opening as Bill begins to show her the porous boundary between this life and what comes after.

Excerpt: The Man Who Came and Went

That day, the day Bill arrived, my mom was serving up eggs and complaints.

“Dammit, that daughter ‘a mine,” she yelled to Dolene, across the diner. “She’s like walking birth control. Does she think I’m trying to have babies? ‘Scuse me, Darlin’” Maybell gave Clover’s bubble walker a little kick, sending it between tables 4 and 6 so she could get by and dump a load of dishes behind the counter.

Dolene was homegrown, like the tumbleweed, with eyes like a golden retriever that never quite looked at you directly. She was smart enough to add up a check, but you could tell she was never getting out of Hadley. “I take it you didn’t get laid last night.”

Maybell pointed to her sour puss. “Does this say ‘laid’ to you?”

There was a ‘harrumph’ from booth 5 by the window. That was Rose. Rose was an old woman by the time she was 30. Now she was in her late 60s, a widow since before I was born—in other words, forever. She liked to spend her afternoons at Maybell’s Diner, reading her book and keeping an eye on the goings on around her, as if she was the town’s homeroom teacher.

There was another sound from Rose, something between a ‘well’ and a ‘pfffft.’ She never took her eyes off her book.

The door opened with a DING from the bell that hung on it. No one noticed Bill entering. He was about average in height, but his skinny frame made him look taller. You could tell from his face that he was in his mid-20s, but those were hard years he had lived, and his body looked frail and geriatric. His clothes were old and clung to him like an extra layer of skin, with a smell that would never wash out.

The angles of his face were sharp and careworn. But his eyes, those were different. His face was hard and weathered, but his eyes were soft. They seemed brand new.

No one in the diner even looked. If they did they would have seen those eyes taking in every little detail: the people talking, forks carrying food, the string lights behind the counter, Dolene ringing up a check. But what drew Bill more than anything else was the grill. Harley, the grill cook, must have had four meals going at once, each with its own set of sounds and smells. Most of those meals involved eggs. His spatula made a metal-on-metal scrape as he turned them. Bill was riveted. He went to sit at the counter to watch.

Down the counter, a porkish-looking man named Earle—probably one of three men in town who had never slept with my mom—raised his empty cup. “Can I get a refill, Maybell?”

Maybell stopped and faced him. “Seriously, Earle? Is it so goddam much trouble for you to get up off your ass and get it yourself? Can’t you see I’m working here?”

Maybell pointed to the coffee pot. “How far away is that? Two feet?”

“Am I your personal slave, Earle? Is that why God put me on earth?”

Maybell grabbed the pot and sloshed coffee in his Earle’s cup. “There. You happy now?”

While she had the pot in her hand, Maybell filled the cup sitting in front of Bill. “I’ll be by to take your order in a minute, hon.”

Maybell walked on. Bill just sat there and stared at the coffee. For him, there was no diner anymore, no Maybell, no clanking dishes or dumb conversation. He leaned closer to that cup like it was the only thing in the world. And there he was, smelling coffee for the first time. And it smelled like life. Like a whole world. Like this is how a planet smells if you’re up in space and could take a deep breath. Bill was motionless for who knows how long. And then, when he was good and ready, he took his first sip.

Those eyes, the ones that didn’t belong on his head, they closed as if he was praying. No, more like he was hearing a prayer. The coffee was praying to be heard, and Bill heard it. 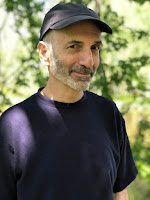 Joe Stillman co-wrote “Shrek” for Dreamworks which earned him an Academy Award® nomination for Best Adapted Screenplay and the Annie and BAFTA Awards. Other produced features are “Beavis & Butthead Do America”, “Shrek 2”, “Gulliver’s Travels”, “Planet 51” and “Joseph King Of Dreams”.

In television, he was co-producer and writer on “King of the Hill,” for which he received two Emmy Award® nominations. He was a writer and story editor for Nickelodeon’s “The Adventures of Pete and Pete” and a writer on MTV’s “Beavis and Butthead”. More recently he worked on Nickelodeon’s “Sanjay And Craig” and “Kirby Buckets” for Disney. Other TV credits include “Albert” for Nickelodeon, “The War Next Door” for the USA Network, “Clueless”, “Doug” and “Danger And Eggs” for Amazon.

Joe is currently working on “Curious George” and “Half-Baked 2” for streaming on Peacock.

The Man Who Came and Went Tour Giveaway

A signed copy of The Man Who Came and Went

Enter the Bewitching Book Tour The Man Who Came and Went Rafflecopter Giveaway 2022.