Spotlight on Reverse Harem: Leaving Tracks In The Snow by @Brantwijn Serrah

Hi Everyone! The fabulous Brantwijn Serrah is here today with her new poly romance series, Shifter’s Dawn. Info on the first book is below. Next week, I’ll spotlight the second book. It’s recommended you read them in order. Enjoy! 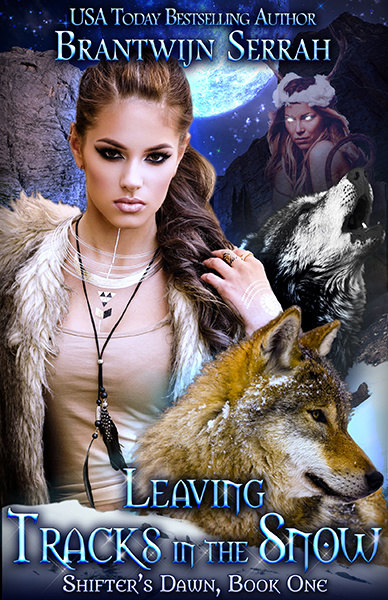 Can she save her fated mates from exile?

Running wild in the Siberian wilderness, an ancient tribe of shapechangers guards against incursion by their corrupted cousins: the twisted and malevolent skinwalkers.

Elaina discovers a new world of myth and magic when two beautiful shifters save her from freezing in the Siberian snow. But in a time of fear and danger, her heroes face banishment from their own kind. In order to save them, Elaina must become the first human in thousands of years to learn their ancient magic.

Fans of The Southern Vampire Mysteries, the Anita Blake series, and Immortals After Dark will love this new paranormal romance and reverse harem series, Shifter’s Dawn.

Elaina set down the coffee mug and picked up one of the photos. This one showed only Gavri’s mother, sitting cross-legged in a field of yellow grass and tiny lavender flowers. She held in her hands the same strange canvas object currently hanging on the wall right behind Elaina.

“This is not the bedroom I had in mind for you, krasavitsa.”

She jumped, dropping the picture and grabbing uselessly for it as it clattered to the floor. Relief washed over her when it didn’t break, no doubt saved by the cloud-soft carpet. Before she could pick it back up, though, a figure swept in past her and snatched it, returning it to its place.

Elaina spun to find Gavri only inches away, arms crossed over his chest, expression grim. She backed against the dresser before she could think better of it, and he moved with her, leaning in, putting one hand on the wood to either side of her, pinning her there.

“Something in here catch your fancy?” The low growl in his tone brought up the hairs on the back of her neck. His eyes had changed again to full, flooded black, like shining ink, cold with anger.

“I’m sorry, Gavri,” she said, her flimsy excuses flying away like frightened birds. “I—I shouldn’t have been in here.” Why did she suddenly think of Dominic and his heartless proclamation? It’s just not working. You’re a burden, Elaina.

She’d crossed a line. What if she’d now upset Gavri too much? Would he throw her back out into the snow, too much trouble to bother with?

Her apology didn’t appear to move him. He cocked his head to the side and looked as though he would say something else, when he paused. He sniffed once, then closed his eyes to lean closer and draw in a deep breath.

Her scent. Just like the night before, he was taking in her scent, and evidently enjoying it. Elaina opened her mouth to explain her behavior—maybe if he was soothed somehow by the bath oils or the fresh, damp aroma of shampoo, he’d be more forgiving—but all at once whatever had hit him knocked her for a loop, too. She groaned as the smell of his skin reached her, the sharp but not unpleasant aroma of hard-earned sweat and earth, sun and pine.

Gavri closed the distance between their bodies, pressing her against the dresser and lowering his mouth to her throat. His kisses sparked an instant thrill in her, a shudder of sweetness tingling through her skin. An adamant hardness pressed against her thigh and she had only enough time to realize he’d gone from very angry to seriously aroused in about forty-five seconds, when he spun her away from the dresser and flung her to the bed.

She did not object.

Gavri lunged over her, grasping at the belt on her robe, and she marveled at his heavenly, delectable scent. “What is this?” she asked as he fell upon her in the sheets, kissing and nuzzling. “What… what is it making us… so insane?”

He only growled in answer, and straightened just long enough to work at his belt. A girlish giggle doused the sudden heat, though: Elaina and Gavri both snapped to attention and looked toward the sound.

Rini stood in the doorway, smothering a laugh with her hand. Her cheeks pinkened with a delicate blush, but no hint of shyness or scandal as she gazed at their half-naked forms.

“Oh!” Elaina snatched at the sheets to cover herself. Rini waved a hand dismissively.

“I guess I would be all coiled up and hungry for some exercise, too.” She shook her head. “But you’ll both have to hold off a bit. Dinner’s ready.”

Without waiting for an answer, she disappeared into the hall. Elaina stared at Gavri. Gavri stared back at her. Spell seemingly broken, he slipped away from her to rearrange himself.

“What was that?” Elaina sat up and fixed her robe. Gavri didn’t respond. When she looked up, he’d turned his attention back to the pictures she’d been examining. His frown returned as he adjusted a couple she’d examined.

He said nothing as he extended a hand and helped her up from the bed.

“It’s rude to snoop through people’s things,” he growled. “I could give you a pass, Elaina, considering the ordeal you’ve been through. But I really, really don’t appreciate people invading my space.”

Elaina refused his hand, coming to her feet and squaring off with him.

“You’re right, Gavri. I shouldn’t have come in here and I have no excuse. I’m sorry for that. But you need to tell me the truth! I’m not going to just go away and forget what you and Kolya did for me. Or what I saw.”

She crossed her arms over her chest and pinned him with a firm gaze. “Tell me about the wolves.” 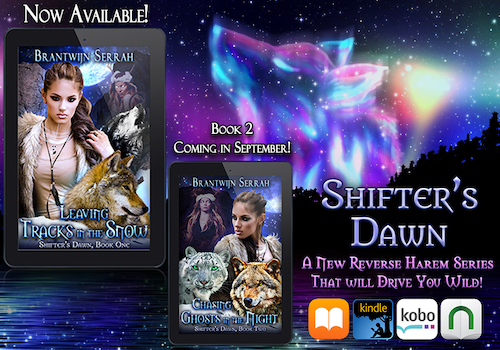 Brantwijn writes paranormal and supernatural fiction, both romantic/erotic and non-erotic. Her influences include authors such as Stephen King, JK Rowling, Jennifer Roberson, Jim Butcher, Kresley Cole and Charlaine Harris. Almost everything she writes also takes a strong influence from music, particularly Florence +The Machine, Lady Gaga, Sarah Brightman and Nightwish. She’s a fur-mommy to four cat children and one dog too smart for his own good, and is happily married to a wonderfully supportive husband.