Hope you had a fabulous summer. Please enjoy this cover reveal for an upcoming release in adult, dark fantasy, complete with excerpt. xoxo… Celia. 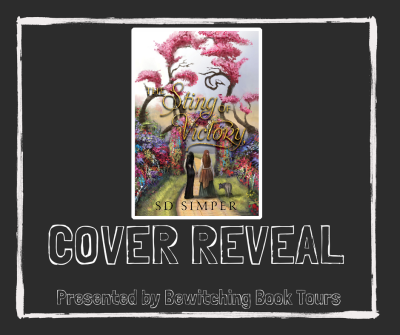 Book Description:
“When faced with monstrosity, become the greater monster. The sting of victory will fade with time.”

When Flowridia, a witch granted power by an unknown demon, deceives an alluring foreign diplomat, she is promoted to a position of power to conceal her falsehood. Thrust into a world of politics and murderous ambition, she has her gentle heart and her Familiar to guide her – as well as a drunk Celestial with a penchant for illusion.

Meanwhile, Lady Ayla Darkleaf, Grand Diplomat of Nox’Kartha, smiles with predatory charm and wields her blades with a dancer’s grace. Flowridia falls into a toxic love affair, one she knows will end in heartbreak. But as Ayla’s legacy as a vampiric creature unfolds, Flowridia begins to see the broken woman behind the monster.

When a foreign emperor dies at the hands of a mysterious interloper, one who seeks to collect the greatest sources of power in the realms, Flowridia’s kingdom is charged to stop him. But Flowridia’s devotion becomes torn between duty to her own and the woman whose claws grip her heart.

In the ensuing clash of Gods, Flowridia must choose her loyalties with care – the fate of kingdoms rest in her hands.

Moonlight brushed the air in silver wisps, barely perceptible through the thick cover of trees. But enough shone through to cast a shadow upon the secluded cottage, that of a wolf coated in mud and grime.

From within, Flowridia ripped the door open. “Aura!” she cried, weeping as her arms tangled in the damp fur of her beloved companion – Aura the wolf, her lost friend and familiar, had come for her at last.

Noxious odors from the swamp mixed with the earthy, rotting scent of mushrooms and the horrors that fed them. Aura’s golden eyes shone bright, reflecting the filtered celestial light and the phosphorescent glow of fungi dotting the walls and moist garden plots. More garden than room, the fungal forest grew in patches, some of the mushrooms taller than Flowridia herself.
Aura had grown during their three years apart, standing nearly at Flowridia’s shoulder in height. Even matted in swamp filth, her silver fur matched the dim moonlight.

Despite the joy at their reunion, urgency tugged at Flowridia’s panicked heart. “Aura, we have to leave. If she hears us—”

Shattered glass broke the fragile peace. Flowridia, her arms tight around Aura’s neck, saw a dark silhouette in the doorframe of the bedroom and the remains of a ruined potion on the floor. “Flower Child, what is this?” The woman spoke gently, the eye of a storm Flowridia knew capable of tearing them both to oblivion. Odessa the Swamp Witch stepped into view, beautiful despite her sneer, a distorted, matured mirror of her cowering daughter. Eerie green shone from within her eyes, her mouth, even the pores of her skin. “All of my love, and this is how it’s returned? Slinking off in the middle of the night?”

Growling from Aura’s throat vibrated against Flowridia’s arms. Mother merely chuckled. “Your familiar is every bit the hero that you are the coward.” She turned her gaze onto Aura directly, stepping forward as that same green began to swirl at her feet, smoke before a raging fire. “Stay with us. She’ll be better with you and I both to guide her.”

A snarl tore from Aura’s throat. Flowridia’s grip on her neck tightened.

“No? A pity,” Mother said, and as she stepped, Flowridia watched her form shift and elongate. “So much wasted potential.”

Flowridia had seen hints of Mother’s shadow, one that never quite matched her sultry figure. Now the woman twisted and grew, her hands gnarling into vicious claws, her skin shriveling and turning grey. Those eyes, still illuminated by sickly green, grew large, bird-like. The woman, once beautiful, became hunched.

Flowridia tugged on Aura’s neck, pulling her to the door, but green fire – the same shade as the smoke swirling around Mother’s grotesque form – blocked their exit.

Aura tore herself from Flowridia’s grip, a beastly roar at her throat as she bolted forward. Leaping, the wolf tackled the monster and ripped at the woman’s face with her teeth. A swipe of Mother’s mutated hand threw Aura aside. Bleeding, cackling, Mother pulled herself to her feet in time for Aura to pounce.

This time, Mother braced herself. Her hands dug into the wolf’s fur and skin, blood seeping from her nails as Aura struggled in her grasp.

The light shining from Mother’s eyes changed from green to deep purple, and the smoke swirled to match. Aura released a pained howl, and Flowridia screamed as the wolf’s body began to shrivel, withering away as though starved.

On the table, a knife – encrusted with dried blood – caught her eye. Heart pounding, Flowridia didn’t think; she grabbed the knife and threw.

Blood sprayed. The knife embedded into Mother’s throat, soaking Flowridia and the limp wolf in the monster’s vital fluids.

Mother shrieked, that same purple glow bursting from the wound, the hilt protruding from beneath her chin. The smoke, once peaceful, spun into a violent torrent. Aura fell motionless to the ground as Mother’s cry grew higher, louder. Her clawed hands shook as she reached toward the knife.

All at once, the light ceased. Smoke dissipated. Mother fell to the ground, her monstrous form dissolving into the air. A woman’s corpse, a knife jutting from her throat, lay in a pool of her own seeping blood.

Flowridia’s sob cut the taut string of peace. She fell to her knees, giving no mind to how her skirts absorbed Mother’s blood. Silver fur, stained red, met Flowridia’s fingers as she desperately pulled Aura’s emaciated form to her lap. The wolf’s coat, once soft, had become coarse, aged by Mother’s dark magic.

No light in those golden, clouded eyes. Already, Aura had gone cold. With that came an awareness of the hollow in Flowridia’s soul. Her familiar, the animal companion granting her mysterious power, lay dead, and with it her connection to the world of magic. Muted, all she had worked for; the power she had gained gone away.

Three years trapped in hell, but never had she felt so lost. She held Aura’s body to her chest and wept.

The words shone pristine, carved in stone, the last gift she could give her dearest companion. Content to lie down and starve to death, Flowridia might have lain on the grave forever had red eyes not shone from the woods.

The demon began to hunt her then. 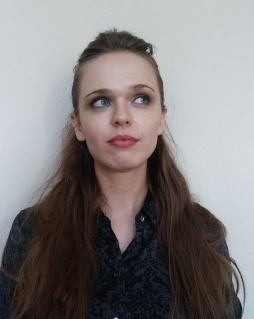 S D Simper has lived in both the hottest place on earth and the coldest, spans the employment spectrum from theater teacher to professional editor, and plays more instruments than can be counted on one hand. She and her wife share a home with their two cats and innumerable bookshelves.