Hello Dear Readers!
My writing pal, Amber Belldene, author of one of my favorite vampire series – The BloodVine Series – is back with a new paranormal romance: The Siren’s Touch. Read my review and enjoy the excerpt below… Happy release day to Amber! 🙂 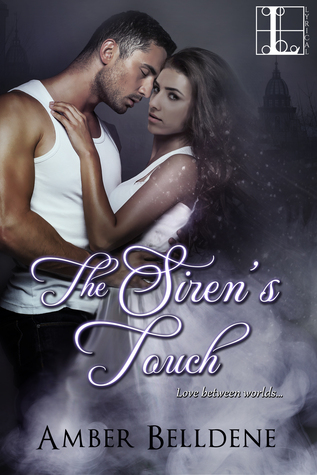 We meet two characters over tea—Dmitri the hitman and Sonya the rusalka (ghost)—both on a mission to right past wrongs. No spoilers here, but suffice it to say they team up for a second chance at happiness.

Belldene paints a vivid backdrop for her Ukrainian characters, placing the action in San Francisco. I particularly enjoyed the downtown scenes in Yerba Buena Gardens and Bloomingdales—oodles of action and a bit of trembling ground thanks to our ghost Sonya.

While I enjoyed Sonya and her dual personality—sometimes sweet and innocent while other times in evil and furious ghost mode—I love Dmitri. Love, love, love him. A hard man with blood on his hands; a man who has a kernel of hope for redemption locked deep in his gut.

He’s a man of few words but what he says, and thinks, both pack a powerful punch. For example: “…she pressed her hand over his heart. He’d hardly known the damn thing was there until she’d showed up and insisted on touching it all the time.”

His raw and honest emotion, his feeling of being unworthy, all of him pulled on my heartstrings and had me rooting for his success in not only helping Sonya but of purging his own past demons and healing old wounds.

Bottom line: Siren’s Touch is a great read for paranormal romance fans. Enjoy the romantic journey where even a hardened thug and a lonely ghost can find their happily ever after. I look forward to the sequel starring Sonya’s dead sister, Anya.

One touch can change everything…

Hitman Dmitri Lisko is determined to avenge his father. Once he takes out the man he believes is responsible for his family’s tragedies, he’s done killing for good. But a mysterious woman may tempt Dmitri to change his plan.

Sonya Truss was murdered in a Ukrainian village in 1968. Now she’s reappeared in San Francisco as a rusalka—the ghost of a wronged woman. And she’s thirsty for the blood of her killer. But she has to make things right before she’s trapped between worlds forever.

Sonya’s enigmatic siren powers stir Dmitri’s long-buried chivalry, and he finds himself compelled to help her. He also can’t resist giving her a taste of the pleasures she never experienced while she was alive. Soon they discover that touch has surprising consequences. Yet when their shared mission comes to cross-purposes, they must choose between deadly sacrifice—or surrendering to the one act that can save them both.

[…] the teapot jostled like there was a frog inside.

He had to be hallucinating. Holy hell, he’d never been this hungover. Then again, he’d never been on a thirty-day bender either. Quitting cold turkey after a vodka-soaked month was bound to be rough on the system. The teapot was definitely not jittering, only his sanity. Caffeine might help.

He lifted the little round thing by the handle. A gust of steam poured out as deep-brown liquid trickled from its spout into his mug—an antique glass cup wrapped in silver filigree. In his hand, the teapot shook, jostling his arm.

Damn it. That was no hallucination.

A sudden puff of steam collided with his face. He set the teapot down and wiped his moist eyes. When he opened them again, he was certain he’d lost his mind.

Hovering over Elena’s postcard-perfect traditional Ukrainian table setting was a shimmering tea-colored woman. No, not a woman.

He reached for his weapon, knocking his chair to the floor. Scrambling across the room, he got as far as he could get from that…thing.

Back pressed to the wall, his heart drummed against his sternum. What the hell was she?

She dripped brown droplets of smoky Russian Caravan onto the table and gasped for air with her gossamer hands clasped at her neck. Her brown eyes stretched wide in her heart-shaped face.

Had he completely lost his mind? “Fuck.”

The thing yelped, flying away and leaving a sprinkling of tea droplets in her wake. As they fell to the ground, she grew whiter, becoming the soft, shiny color of a perfect pearl.

All his skin rose up in goose bumps. Could you shoot a ghost? Or a hallucination? He was damn sure going to try. He took aim.

Without thinking, he lowered his weapon. “Breathe, girl. Be calm.”

Slowly, she straightened, and her chest rose and fell in the rhythm of breath. The sun shone through her translucent form, highlighting a smoking hot set of curves under a long, wet nightgown. Large brown nipples poked through the ghostly, damp fabric, and a dark vee between her legs drew his gaze.

This wet dream of a sexy, drowned ghost was proof he’d jumped into the deep end.

Amber Belldene grew up on the Florida panhandle, swimming with alligators, climbing oak trees and diving for scallops…when she could pull herself away from a book. As a child, she hid her Nancy Drew novels inside the church bulletin and read mysteries during sermons — an irony that is not lost on her when she preaches these days.

Amber is an Episcopal Priest and student of religion. She believes stories are the best way to explore human truths. Some people think it is strange for a minister to write romance, but it is perfectly natural to her, because the human desire for love is at the heart of every romance novel and God made people with that desire. She lives with her husband and two children in San Francisco.