Spotlight on Red The Were Hunter by Rebekah Ganiere

What if you were the key to an ancient prophecy that would begin to heal your lands, but fulfilling your destiny meant you had to turn your back on everything you’d been taught to believe in?

Redlynn of Volkzene, member of the Sisterhood of Red, is heartbroken to discover another girl kidnapped and her best friend slain by werewolves. Defying the head of her order, she sets out to kill the beast she believes responsible. The King of the Weres– But there are worse things in Wolvenglen Forest than the wolves.

Adrian, reluctant heir to the throne of Wolvenglen, and his band of wolf brothers are bound to protect the humans; especially the Sisterhood. Finding Redlynn unconscious in his woods, awakens in him a passion he’s never before experienced and a protective instinct that has him ready to turn on his own men. Problem is, a female is the last thing Adrian needs complicating his life.

But all is not as it seems in Wolvenglen Forest and to save the missing girls before time runs out, Redlynn and Adrian must move past their inner demons and learn to trust each other. In the search for vengeance however, sometimes you must give up what you desire most.

Red The Were Hunter won 2nd Place in the Hook, Line and Sinker Contest and is a current finalist in the Great Beginnings Contest.

Red The Were Hunter Excerpt

Each step sapped Redlynn of her strength, but she refused to let it show. Her body felt like a rope twisted too tight. Each movement stiff and painful. Slower than she wanted to, she made her way to the bathroom. Stepping up and through the threshold, steam from the water moistened her face. It’d been a long time since she’d felt a hot bath. And she’d never seen a tub in a room of its own before. Breathing in the perfumed water, she relaxed. 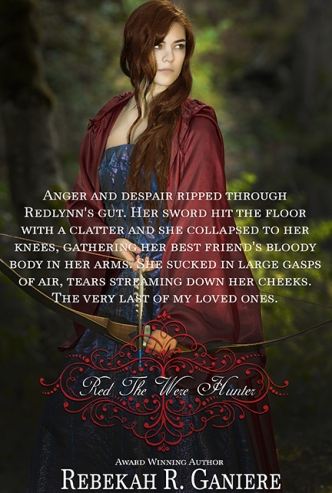 Redlynn turned to find Adrian watching. Hanna slid into the room behind her, and closed the heavy door.

“Let me help you out of your clothes, dear.”

Redlynn opened her mouth, but Hanna raised her hand.

“Stop right there. You want to be brave for Adrian, wonderful, but not with me. You’re hurting, and you have nothing to prove to me. I already know how strong you are. Let me help you.”

Without waiting for an answer, Hanna undressed Redlynn and eased her into the tub. She couldn’t hold in the sigh that escaped her lips at the warmth of the water.

Hanna reached into her pouch, pulled out a canister, stepped up to the tub and knelt on the floor. “Let me help cleanse the area of the bite.”

Redlynn nodded and leaned to the right. The stretching of her neck pained her shoulder and collarbone. Redlynn winced and bit her lip.

Hanna hummed, gently working the soap into the wound. The tune was familiar but Redlynn couldn’t place it. “What is that you are humming?”

“An old lullaby my mother used to sing to me. Do you have a family, Red?”

Redlynn swallowed hard. “Not anymore. My father was driven off by a Were when I was young. It broke my mother’s heart. She missed my father every day. She died a few years ago, and the only other person I called family died two nights ago. Killed by the Weres that I was in the process of eradicating when I was brought here.”

“How do you know it was Weres?” Hanna asked.

“The Head of my Order confirmed seeing them.”

“Oh, it’s probably nothing, but I was just thinking. How would wolves grab a girl and carry her away?”

Redlynn’s mind raced. It’d always been the Weres that’d taken the girls, or so they’d been told. But Hanna was right, how’d Weres get the girls out?

A knock pulled her from her thoughts. “Is everything okay in there?”

“We’re fine,” Hanna called. “But we need some towels.”

Hanna looked at Redlynn and smiled. “He’s a good man. He’s tough, and scared to let anyone in, but a good man.”

“You know him well?”

Hannah nodded. “We all know each other well enough here. But, they’re all good men.” Hanna stood and put the soap away.

“Yes, most of his subjects are men. There are about fifty of them here right now.”

“There are a few of us here. But let’s be honest,” Hanna laughed. “The forest isn’t the kind of place most women want to live in.”

It was true. Redlynn loved the woods. She always had. But she couldn’t imagine many people did. “Why don’t the men leave?”

“This is their home. They know nothing else.”

There was another knock. Hanna slid the door open slightly and Adrian passed the towels through the gap to her. Hanna held up the towel like a shield and averted her eyes. Redlynn grasped the right side of the tub with her good hand and got her feet underneath herself. She tried to stand but the tub was slick with soapy water and she slipped, crying out.

“Here, let me help.” Hanna dropped the towel and wrapped her arm around Redlynn’s waist. She tried to lift Redlynn, but Redlynn cried out again.

This time the knock was loud. “What’s going on?”

“I can’t take her out,” Hanna called.

The door swung inward and Adrian stood at Redlynn’s back. She hunched over, letting her hair cover her body. Adrian bent down into the water to draw her up, but she pushed him away. Her body flushed with heat.

He took a deep breath and turned away. “I’ll close my eyes.”

Redlynn let out an indignant ‘Hey,’ as he bent down a second time and lifted her.

She protested and slipped in his grip.

Redlynn swallowed and put her good arm around his neck for support. Their eyes met and she licked her lips involuntarily. His hard muscles flexed around her and her thighs warmed, even though the air chilled her skin. Walking out of the bathing room, Adrian sat her on the end of the bed and turned away. 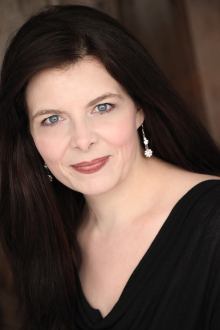 Rebekah is an award winning author. Her first novel Dead Awakenings, debuted in January 2014. Red the Were Hunter, the first in her Farielle Series, will be published May 1, 2014. Her trilogy The Society will be released in early 2015 by Kensington’s Lyrical Press. Rebekah is the VP of Communications of the RWA FFP Chapter as well as a member of her local Los Angeles and Orange County Chapters. In her spare time when she isn’t writing you can find her moderating on Savvy Authors.com and in her local SCV Writers group, or hanging out with her husband, four children and dog, rabbit, two bearded dragons, three tortoises and a handful of fish. The escaped snake has yet to be found.