I’m off visiting Dey for Love and VampChixBite today. **Giveaways** in both places. Stop by and join the fun, but first… please enjoy this article by master craftswoman Rayne Hall. 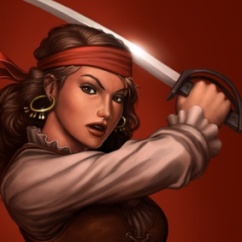 Do you want your fight scene to be realistic? Before you say yes, consider what your readers want. In most genres, readers want entertaining fight scenes, brimming with excitement, where heroes and villains display amazing skills. Real fights are nasty, brutal and quick.

As a writer, you may need to create a compromise: a fight scene that entertains but feels realistic. I suggest you create an illusion of reality. Here are ten techniques how to achieve this.

1. Spatial restrictions – Your scene will gain realism if you show how the available space limits the fighting: Perhaps the ceiling is too low to swing the sword overhead, or the cop heroine can’t risk shooting at the bad guy because he’s standing in front of the wall, which could lead to bullet ricochet and kill innocent bystanders.

2. The ground underfoot – Inject a realistic flavour with a single sentence: simply mention what the ground feels like underfoot. What’s the ground like: Persian rugs? Concrete? Lawn? Uneven planks of splintered wood? Hard, firm, soft, squishy, muddy, wet, slippery, wobbling, cluttered, sloping? The ground may even affect the fighting: the heroine may slip on the rain-slicked asphalt or stumble across the edge of a rug.

4. Little Or No Dialogue – Avoid dialogue during the fight. The fighters need to concentrate their attention on staying alive, and can’t spare a thought for conversation. Panting with effort, they don’t have breath to spare for verbal banter. Any talking should happen before the fighting starts. If you really need dialogue during the fight, use very short and incomplete sentences, because these convey the breathlessness and sound real. 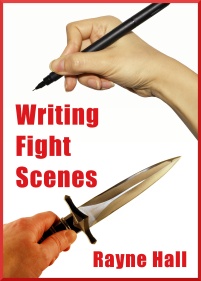 5. No time for thinking – Your PoV doesn’t think while he fights. His mind is totally focused on the action. He can’t think about anything else: not about about his loved ones back home, not about the futility of war, not even about fighting strategy. Any thinking would be a distraction that costs his life. Share his thoughts about strategy before the fighting starts, and his profound insights once the fight is over.

6. Believable skills – The fighters can use only skills they possess. A heroine without martial arts training can’t defeat her opponent with an uppercut and a roundhouse kick. Unarmed combat and fighting with weapons requires practice. Establish beforehand what fighting skills the protagonist has, for example by showing her in an earlier scene dusting her shelf of karate trophies.

7. Sounds – Mention the noises of the fight: the pinging of bullets, the clanking of swords, the sharp snap of breaking bone, the screams and gurgles of the dying. Sounds create realism as well as excitement.

8. Real weapons – Make sure your fighters use weapons which existed in that period, and that they use those weapons in plausible ways. Not every sword can split a skull, not every gun allows accurate shooting at a distance. If you invent a weapon, model it on real weapons, and keep it simple.

9. – Fighting hurts. Your PoV character must feel the pain of the blows and cuts. During the fight, the rush of adrenaline may dull the pain, and the real pain kicks in when the action is over. Real fighting also leads to injuries, and your hero needs to sustain some cuts and bruises, at least.

10. Aftermath – Once the fight is over, add a paragraph describing the aftermath: the survivors assess the carnage, mourn their friends, bandage their wounds, repair their weapons. The adrenaline has worn off and the pain kicks in. The air is filled with strong smells, including cordite in case of a gun fight, and urine and faeces because bladders and bowels give way in death.

When deciding how realistic to make your fight scene, consider your genre. In a hard-boiled thriller, you can use a lot of realism, including brutal violence and gore, but in a gentle romance, it’s better to play down the gory aspects and create just enough realism to suspend disbelief. From these ten tips, select the ones that suit your reader and your story.

Rayne has lived in Germany, China, Mongolia and Nepal and has now settled in a small dilapidated town of former Victorian grandeur on the south coast of England.